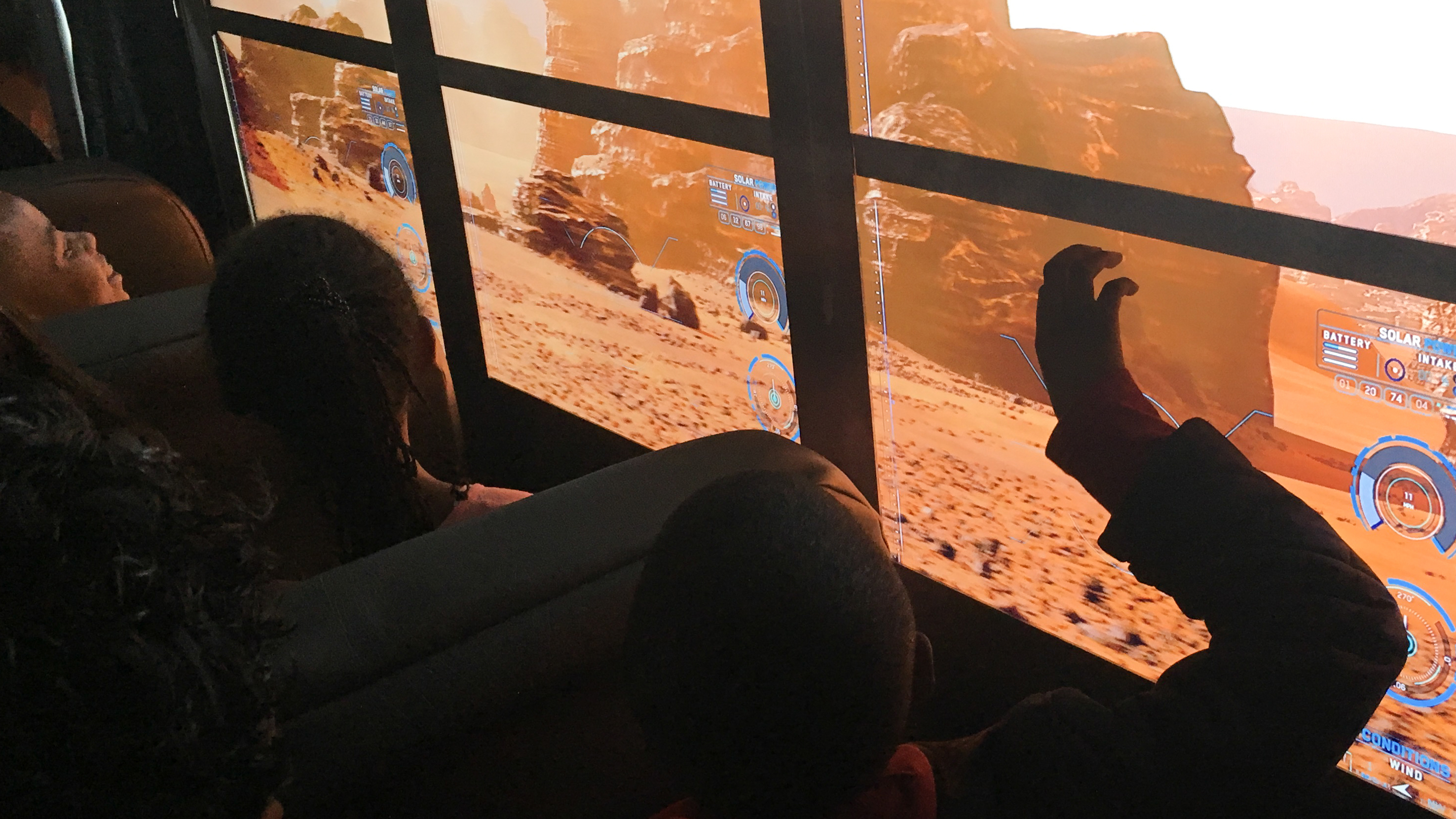 The first people who will visit Mars are sitting in school today. In fact, the first astronauts will arrive before today’s kindergarteners graduate college. To help inspire these students, Lockheed Martin, with their advertising agency McCann New York and BAFTA and Academy Award-winning VFX production company Framestore, created a one-of-a-kind bus that transported students to the surface of Mars. It made its first run at the 2016 USA Science and Engineering Festival in Washington D.C. then continued on to tour the U.S. for two years which ended in October 2018 when it was inducted into the Smithsonian National Air & Space Museum.

As sponsor of the 2016 U.S.A. Science and Engineering Festival, Lockheed Martin launched a wider initiative, Generation Beyond, to inspire and engage the scientists and technologists of tomorrow. Through providing such a dazzling experience within the comfort of a school bus, the young attendees of the Festival couldn’t help but look to the future. “Our children — the elementary, middle and high school students of today — make up a generation that will change our universe forever. This is the generation that will walk on Mars, explore deep space and unlock mysteries that we can’t yet imagine,” said Marillyn Hewson, Lockheed Martin Chairman, President and Chief Executive Officer. “They won’t get there alone. It is our job to prepare, inspire and equip them to build the future – and that’s exactly what Generation Beyond is designed to do.”

To be able to look out of the windows then have them turn into 4K screens, I designed combination of technology which comprised of switchable security film glass and a 4K display panel. The windows are transparent to start then the switchable film went opaque which blocked the outside image and helped reflect added light elements. The 4K panel dissolves from transparent white to the experience.

Using the Unreal Game Engine as the platform for the experience, the game devs at Framestore New York created a 200-square-mile “worldspace” based on the real street map of D.C. The team programmatically covered the area with geological features and painted objects along the bus’s route, and created a system that would allow real bus speed, GPS and accelerometer to be translated into Unreal, creating a real school bus that would exist inside the realm of a video game.

The bus itself became the headset: transparent 4K screens enabled passengers to look outside to D.C., before being transported to the rocky terrain of Mars. We created a control system that used the movement of the bus and translated it into the game engine. The controls combined off-the-shelf Maker community components including an Arduino kit with an industrial laser surface velocimeter. The rider feels the real motion of the bus and the content on the screens is synced. There are no 4D theater tricks created to simulate movements.

Field Trip to Mars has won over 130 industry awards (listed below). The single most awarded campaign at at the 2016 Cannes Lions International Festival of Creativity with 19 Lions across 11 categories. It was also nominated for a Titanium Lion amongst only 22 out of 43,101 entries across all categories from around the world. The project also won top honor at ADWEEK’s Project Isaac’s, wining three awards including the highest award, the Gravity. The project has also won seven Clios including a Grand Clio, three IAB MIXX awards, one D&AD Impact pencil and 19 LIAs including two Grand LIAs.

After touring the U.S. for two years, and inspiring over 100,000 future explorers, it is now in the permanent collection of the Smithsonian National Air and Space Museum (more below).

Steve Frick (CAPTAIN, USN, RET.) NASA Astronaut, gave virtual tour two space-suited thumbs up. “It’s going to be just a great outreach tool,” Frick said, “having something mobile like that, that’s able to go out to where kids are and give them the experience first-hand of what it might be like to be on Mars. Hopefully it’ll get them wanting to learn more and look for other materials,” “which we’re also hoping to provide [by] getting our online curriculum out into the schools.”

“But an even better path forward is McCann New York’s and Framestore’s “Mars Experience Bus” for Lockheed Martin, which Yapp called “one of the best examples I’ve seen of VR.” – Michael Yapp (founder and director of Google Zoo) at C2

After touring the U.S. for two years, and inspiring over 100,000 future explorers, the bus was added to the permanent collection of the Smithsonian National Air and Space Museum.

After we launched the project with McCann in Washington D.C. in March 2016, the bus became the responsibility of the IPG experiential agency Momentum. They repainted and outfitted the bus for a new role, part of an educational road show. In partnership with Lockheed Martin, Momentum sent the bus around the country. I had the opportunity to see the bus at Kennedy Space Center in Florida. In October 2018, the tour ended when the bus was donated to the Smithsonian National Air & Space Museum. A huge honor.

Family visit to Kennedy Space Center to visit the bus in August 2017.

GOLD
Out Of Home
Public Relations

GRANDY
Campaign of the Year

This work is licensed under a Creative Commons Attribution 4.0 International License.